This post was also published on Greater Greater Washington

After more than six years in waiting, the District Department of Transportation last fall made good on its commitment to bring traffic-calming measures to First St NW in Bloomingdale. The agency completed the first phase of its work in the last few weeks when it finished installing flexible posts in the street at each of the nine planned intersections along the corridor.

The posts form arcs that wrap around the street corners at intersections. They serve as bumpouts, also known as curb extensions, which physically and visually narrow a street, and reclaim roadway space for sidewalks, beautification, or other measures.

It’s important to note that the posts installed so far are just intended as phase one: DDOT confirmed it will also be adding striping to the roadway as a further visual cue to separate the spaces—a process that it expects to complete in March, as weather permits. Following the striping, DDOT expects to install planters and ground murals; it is working with the Bloomingdale Civic Association to finalize the plan for installation and maintenance of these. The agency expects to have the entire project completed by April.

Efforts like this are a common way to address safety issues at intersections because they have many well-documented advantages. They improve pedestrian safety by reducing the distance—and the amount of space shared with cars—from one side of the street to the other. They’re also a visual signal to drivers to reduce speeds and pay full attention at stop signs. 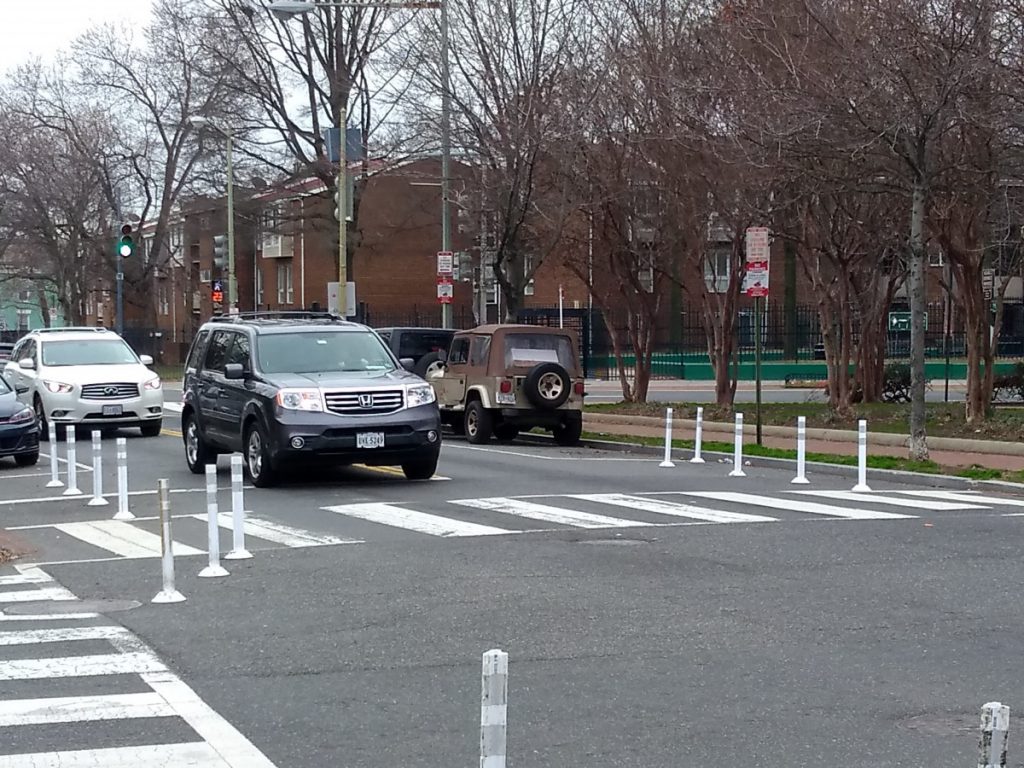 While many in the community have been eagerly awaiting these measures, there has also been some vocal opposition from a few neighbors who are already attempting to have the flexiposts removed. That effort largely has been led by ANC Commissioner Karla Lewis (5E06), who originally opposed the planned installation because they threatened two illegal parking spaces in her single-member-district, then celebrated them as a “win-win” when DDOT compromised to preserve those spaces. But now she’s introducing a resolution at tonight’s ANC 5E meeting requesting reconsideration of the traffic-calming measures.

This opposition has generally included a mix of the following arguments:

Bumpouts are, in fact, supposed to make it harder to turn. Drivers are forced to slow down and stay farther from the curb, using a heightened alertness to safely navigate the reduced space. Since the posts were installed, thousands of drivers have successfully made these turns without hitting anything. The fact that they have to do so in a more controlled way is an argument for, not against, the measures.

As for the recent crash, it’s true that the bumpouts didn’t prevent it, but they shouldn’t have been expected to. In a video of the crash, a driver appears to have blown through a stop sign and collided with an eastbound vehicle, then accelerated further into the front yard of a nearby house. There’s no evidence to support critics’ specious claim that the bumpouts somehow caused the crash, and it’s incorrect to suggest that the incident means they offer no value.

To the same effect, continued stop-sign violations aren’t proof that the bumpouts don’t work either. The metric of success here is not a binary measure of whether or not they eliminate 100% of all problems. Rather, the goal is a relative reduction in dangerous behavior, though at the moment there aren’t statistics to show a trend one way or the other. Even if the rates of stop-sign compliance haven’t changed, that’s just an argument for doing more, not less: You don’t stop brushing your teeth because you got a cavity. In fact, DDOT confirmed that they are investigating adding such additional measures, specifically around stop-sign compliance.

On the question of parking space, there has been some confusion due to recent regulatory changes. To be clear, the bumpouts did not take away any legal parking spaces. DDOT regulation provides that, unless signage says otherwise, 40 feet from each intersection should be a no-parking zone. The confusion stems in part because, until last year, DDOT had allowed an exception to this rule overnight for vehicles with in-zone residential parking permits. As of last January, that exception was removed and all vehicles are prohibited from parking in this space.

Finally, when it comes to the aesthetics of the bumpouts, it’s important to remember that the goal here is safety. While the coming planters and paint will help the situation immensely, people who are still bothered by the visuals could join supporters in advocating to make the bumpouts permanent, replacing the displeasing posts with actual concrete extensions of the curb. The end result would almost certainly be an aesthetic improvement over not just the current flexipost streetscape, but even over what it looked like before.

Big picture, trying to remove the posts after one month is incredibly premature. The current installations are not the end of this process, but the beginning. As DDOT confirmed, it takes time to change driver behavior, and they won’t be able to take full stock of the efficacy until they finish installing the additional elements. Plus, the benefit of flexiposts is that they can easily be adjusted and modified based on real-time data in order to optimize the design before making any more permanent changes.

In fact, that has already happened. After initial feedback, workers re-visited the installations at R Street and Randolph Place to pull the posts closer in to the curb. They then used that information to adjust installations at subsequent intersections. Rather than try to rip them out, community members who have similar feedback can pass it on to the agency so they can review and incorporate it into the next steps.

The community waited 7+ years for action on this street. We can wait at least the few months it will take for them to even be completed before rushing to declare them ineffective.

This may be a good place to introduce yourself and your site or include some credits.